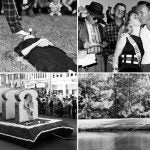 Masters traditions have evolved over the years.

Few events are more bound by tradition than the Masters Tournament, from the Champions Dinner and Par-3 Contest, to green jackets and honorary starters, to pimento cheese and manual scoreboards. Indeed, attending the Masters at Augusta National Golf Club feels like stepping back in time.

But not all Masters traditions have endured.

Some may have been too antiquated to succeed generations, others impractical. Some have been replaced, others abandoned.

As the golf world prepares to revel in the annual rite of spring that is the Masters, let us revisit some of the tournament’s lost traditions.

In 1957, local business leaders formed Masters Week of Augusta Inc., with the mission of creating ways to promote the tournament and try to draw people to town. Implemented ideas included a horse show and a flyover by a blimp squadron from Glynco Naval Base in Brunswick, Ga.

The centerpiece from 1957-64 was a spring parade on Tuesday afternoon in downtown Augusta that newspaper editorials, city leaders and civic organizers compared to the famous Macy’s Thanksgiving Day Parade in New York City and hoped would grow to rival the annual Tournament of Roses Parade that precedes the Rose Bowl every new year in Pasadena, Calif.

Somewhere in the inaugural parade queue, The Augusta Chronicle wrote, was a float from the Fort Gordon Library that depicted Satan trying to blast out of bunker.

“It was just a real exciting thing for our little country town,” Lillian Cullum, who died in 2015, told the Chronicle of the event her late husband — Cullum’s Clothing Store owner, Jim — helped establish.

Beauty pageants were once a popular attraction across America, and Augusta crowned a Miss Golf during Masters week from 1957-67. The winner, wearing her Miss Golf sash, would help present the trophy and pose with the Masters champion on Sunday at Augusta National.

An editorial in The Augusta Chronicle gushed that “it’s capacity to add beauty and excitement to an already beautiful occasion has made the Miss Golf Pageant a highlight of each year’s Masters week. Both the Pageant and its winner add luster to the Week and fully sustain their right to be regarded as the principal side attraction to the Masters Tournament itself.”

The pageant competition was held early in the week at the Bell Auditorium downtown, with a coronation ball taking place on the eve of the tournament. Miss Golf would go home with a cash prize, FootJoy golf shoes and other paraphernalia.

One famous contestant was Nancy Moore of Aiken, S.C., who lost her bid at Miss Golf before becoming Miss South Carolina and later marrying and mothering four children with Sen. Strom Thurmond. Barbara Anne Harris Sorkin of Greenville, S.C., won Miss Golf in 1966 and went on to become Miss South Carolina and compete for Miss America. She presented the trophy to repeat Masters champion Jack Nicklaus, and her experience left an indelible impression.

“I know everyone was abuzz about Arnold Palmer, but I thought Jack Nicklaus was a lot cuter,” Sorkin says now.

Events included an alternate-shot match, a show by trick-shot artist Paul Hahn, an approach-shot contest to the practice green and an iron-play contest in the expanse of property between the 9th and 18th holes that served as the original practice area. According to David Owen, who wrote The Making of the Masters: Clifford Roberts, Augusta National, and Golf’s Most Prestigious Tournament, Roberts once devised a competition in which the pros took turns trying (unsuccessfully) to repeat Gene Sarazen’s famous “double-eagle” shot from the 15th fairway.

“The contests were fun, because the pros were always so relaxed and having such a good time,” a spectator from the era is quoted saying in Owens’ book.

But the most popular special event was the long-drive competition that started when the Masters returned after its three-year World War II hiatus.

The long-drive contest took place on Wednesday at the first tee. Winners through the years included Sam Snead with a 290-yard drive in 1948; Mike Souchak with a drive of 294 yards in 1956; and Mike Fetchick with a record blast of 351 yards in 1957.

In 1954, before missing the fabled Snead-Hogan playoff by one shot despite making a Sunday ace on No. 6, amateur Billy Joe Patton launched a drive 338 yards and then passed up on his last two long-drive attempts. Nobody could top him.

In the final long-drive contest in 1959, George “the Human Howitzer” Bayer won with a drive of 321 yards, with Frank Stranahan next at 294. In 1960, the event was replaced permanently by the Par 3 Contest.

After the 13th of the 68 Masters he covered, Dan Jenkins wrote that “in many curious ways the Bon Air is the Masters.”

“Speak to me now of a Masters, and while you envision deep-green pines, luscious fairways and Bobby Jones, I envision — to pick a starting point — the Bon Air Hotel.”

In Augusta’s heyday as a winter retreat for rich Northerners before they could fly over en route to Florida, the Bon Air was a grand, if quirky, destination. It was the heart of early Masters weeks, with most of the players and prominent dignitaries congregating there (or the Partridge Inn across the street).

Guests were entertained nightly by well-known singers and musicians and it was the site of glamorous gala called the Golf Ball beginning in 1936. The top golfers, including Bobby Jones, attended the ball as the official kickoff for social events during Masters week. By 1938, more than 1,000 tickets were sold.

Most important, the Bon Air was the venue for the annual Masters Calcutta, even after the USGA formally disapproved of gambling auctions in 1948. Players would often buy back shares of themselves and make real money above the tournament purse. Claude Harmon, the 1948 champ, sold for a paltry $450, about 2 percent of the $21,000 in pool. A year later, after his one-year suspension by Clifford Roberts for playing multiple practice shots, amateur Frank Stranahan commanded a princely sum having been runner-up in 1947. Who bought him? Clifford Roberts. Stranahan got the last laugh by finishing 19th.

Any elegance the Bon Air had deteriorated into what Jenkins dubbed “Early Insanity” décor and fell out of favor with players who increasingly stayed in private homes to ruin the once communal vibe. The edifice remains as a senior residence facility.

After a walk through the woods below the cabin that’s named after him, President Dwight Eisenhower recommended that Augusta National build a dam to create a couple of fishing ponds on what is now the site of the par-3 course. Hence its name, Ike’s Pond.

The pond and various other water hazards at Augusta National were well stocked with fish through the years. Bream used to run in Rae’s Creek, which was a popular fishing spot for the caddies who chose not to play golf during the annual caddie day. Bass inhabited the ponds on 15 and 16.

But Ike’s Pond was the favored fishing hole and would attract some Masters competitors — from Snead to Fuzzy Zoeller — who arrived early to enjoy one of their favorite non-golf hobbies.

In 1976, Johnny Miller was fishing alone at the par-3 course on Monday night before the tournament when he caught a 9-pound large-mouth bass, the biggest ever taken from that pond. The avid fisherman reportedly bounded up the hill and — despite his wet tennis shoes — burst into the clubhouse during the dinner honoring international players to show off his wriggling catch.

“You’d think he’d won the U.S. Open,” said Jerome Franklin, who was not only the last surviving charter member of Augusta National but the previous holder of the Augusta National largemouth bass record at 8 3/4 pounds.

Palmetto Golf Club in nearby Aiken, S.C., is the second oldest 18-hole golf course in America — originally designed from 1892-95 by Herbert Leeds (Myopia Hunt Club) and with green complexes that were redesigned and grassed by Alister MacKenzie in 1932 after he finished his work co-designing Augusta National.

From 1945-53, Palmetto attracted an elite field to its Devereux Milburn pro-am tournament the weekend before the Masters, with a cast of winners including Byron Nelson, Ben Hogan, Herman Keiser, Henry Picard, Lawson Little, Harold McSpaden and George Fazio. The $10,000 winner’s share helped ensure top professionals came annually to the Masters, which paid the winner only $2,500 in 1946.

In 1945, in the middle of Nelson’s record streak of 11 consecutive PGA Tour wins, he got his “Phantom 12th” win in Palmetto’s pro-am with Eugene Grace, the president of Bethlehem Steel.

Tom Moore, the professional emeritus at Palmetto and the club’s historian, noted that Sam Snead’s name is notably absent from the board of pro-am winners in the Stanford White-designed clubhouse.

“Snead would have won pro-am two or three times, but he had a way of pissing off his playing partners,” Moore said. “Once a famous jockey of that era was playing with Snead and Snead said, ‘If you make one net birdie on the next three holes, I’m gonna win the pro-am.’ The jockey looked at his caddie and said, ‘Go put my clubs in the car.’”

The Devereux Milburn Memorial Trophy — named after the past president of Palmetto who donated the award — still exists as a two-man member invitational. It’s the most coveted title for members hoping to have their names embossed on the wooden boards with Hall of Famers.

The UG Alumnus impacting the youth through fashion

Mon Jan 4 , 2021
Vogue and type are very vital to younger people, and Augustus Edgar Quartey desires to impact the style feeling of youthful men and women in Ghana and outside of via his apparel manufacturer, Exklamation. Edgar, an alumnus of Mfantsipim University and the University of Ghana, began Exklamation in 2018 as […]

Any cookies that may not be particularly necessary for the website to function and is used specifically to collect user personal data via analytics, ads, other embedded contents are termed as non-necessary cookies. It is mandatory to procure user consent prior to running these cookies on your website.